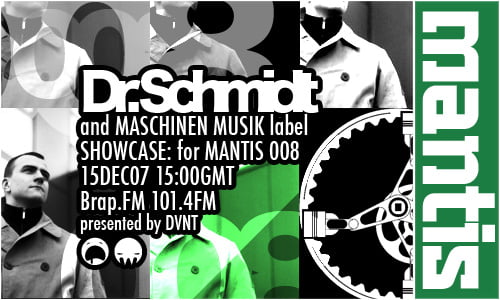 Here we are with the final Mantis Radio of 2007. Round 8 and a showcase from Dr Schmidt and his tech breaks label: Maschinen Musik.

Music made with machines and that sounds like machines. Based on this concept Maschinen Musik was founded in 2003 by German DJ and producer Andreas Schmehl (Dr Schmidt) to fill what he felt was a gap in the broad spectrum of electronic dance music. With a desire to promote a new vision of electronic music, a vision in which techno, breaks, electro, and industrial come together to form a new, raw sound, he created a label anchored in both the techno and breaks scenes. Today, Maschinen Musik provides a platform for artists that think outside established patterns and who share his love for dark, powerful, and danceable music.

Maschinen Musik has created a unique sound between techno and electro with the high production level of UK breaks or drum & bass, and takes special pride in the outstanding individual artwork for every new 12″ vinyl record.

What a way to see out the year. A fantastic mix, either side of which DVNT provided his usual range of electronic sounds. Including new pieces from DST, DirtyBass, Ohmwerk, NX2U, Drift, Kontinent, and Si Begg – with a very special festive bass beast. As well as older tunes from the likes of Tim Wright, Sir Real, Youri and Danny C, Leftfield, Virus Syndicate and Saul Williams.

A massive thanks to all our listeners, podcasters, and most of all the showcased artists and the musicians who put together so much amazing music.

Apologies for the microphone issues throughout. From the new year, 19th Jan, Mantis Radio is changing to a two hour bi weekly (fortnightly) show. So tune in on Brap.FM from 1600 GMT and get your fix of darkfloor electronics, as provided by DVNT and the showcased artists.

Once again thanks for listening, have a wicked Christmas and we’ll see you in the New Year.