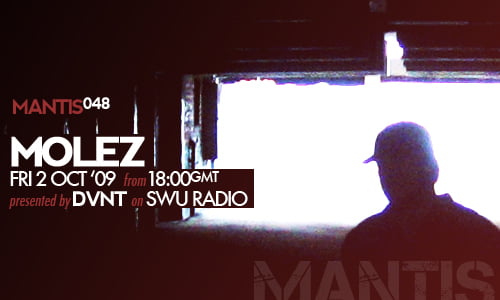 Heavyweight mutant bass darkness from Serbia this week with a session from Molez. We’ve music from Subeena, Guido, Boris The Blade, Dr Schmidt, Hijokaidan and more in the first half of the show.

Róbert Molnár Megyeri’s Molez is based out in Subotica, Serbia. His serious interest music began in 2005 when he began collecting vinyl, consisting of the old skool techstep and hardstep sounds from the likes of Ed Rush + Optical, Konflict, Fission, Calyx, Dom + Roland, Technical Itch, Usual Suspects and so on.

Molez was captivated by the dark atmospherics and futuristic sounds and in 2006 met up with one of the members of the Sympton Crew (an organisation responsible for pushing diverse electronic music in Subotica). That member was Noiz, who noticed that they both shared a similar musical taste. From that meeting, Molez joined members Dekode, Drum:R and Noiz to spread the Sympton sound through Serbia. Thanks to Dekode’s electro, IDM and dubstep records Molez grew interested in producing 140bpm paced music rather than producing drum + bass tracks. His productions are characterized by deep and sci-fi soundscapes.

In early 2008 he met up with Alien Pimp (owner of DubKraft Records) who gave Molez his first track; Sabotage on the Cinematic Dubstep Vol 01 release. With this digital release, Molez became one of the first Serbian dubstep producers. He went on to release his fierce, technoid influenced track Scythe on Rottun Recordings’ Pressure Chamber EP. That same year he was signed to John Bushby’s excellent Digital Distortions label where he released his first EP: Letdown. It was this EP that got me interested in him and I wrote at the time:

Woah. Serious sound sculpture coming out of this hybrid electro, glitch, dubstep, bass rich behemoth of a track. Molez is a new name to ]dD[ but after this, I can see a very bright future ahead. This is a producer in full control of their sound.

This summer he followed up that EP with his next, Last Ditch, also on Digital Distortions. He has an upcoming release, Fields, on Bankai Audio (the Stormfield and Thorn Industries aka Blackmass Plastics joint project label) later this year. His musical dream hasn’t quite come completely true yet as he aims to have a vinyl release some day soon.