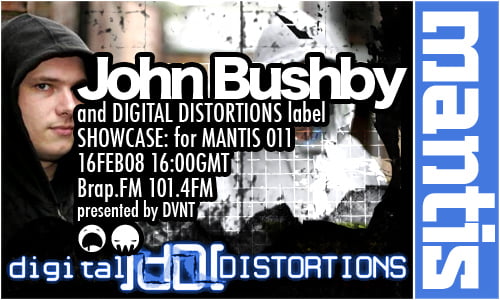 Mantis Radio delves into the electro / tech musical prowess that is John Bushby and his co-owned label, Digital Distortions.

Mantis Radio is very proud to present John Bushby. John is joint owner and A+R of the Digital Distortions label along with his good friend and sometimes mixing partner nEiL_M.

Digital Distortions is a music label releasing mainly electro / breaky / steppy type stuff. They release music via digital download (although they have released a CD and a 12″). They have also been branching out and releasing their other love: Techno, under a sub label Limetree Projects as vinyl and digital releases.

The ethos of ]dD[ has always been to mainly release new and unsigned artists along with a few of our favourite more established names like Si Begg, Cursor Miner and the wee djs to name a few.

John first got into dance music when he was about 11 years old with the sounds of Bomb The Bass and the Streetsounds Electro series being particular favourites. Since then, mainly thanks the Mary-Anne Hobbs Breezeblock show on BBC Radio 1 (which he listened to religiously in his teens) he has spent a lot of time and money discovering and listening to new sounds