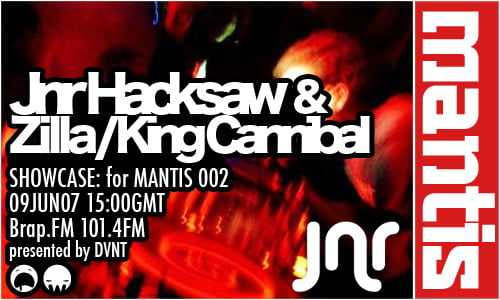 Mantis Radio #2 and the first ever mix from Warp Records’ Zilla recording under the name King Cannibal, AND a session from Jnr Hacksaw too.

Jnr Hacksaw has been a producer of twisted funk to bassheads for well over a decade. In the early 90s Jnr was a founder member of Bristol’s legendary acid funk club The Dig In. Later he joined forces with Elektrik Orgasm one of the countries foremost free party movements and Psychedelic techno label.

Under the guise of Nervasystem & Aether, Jnr brought fucked up synthnoise to parties all over the UK and the rest of the world. Eventually Jnr became disillusioned with the techno scene and found new inspiration in the emerging electrobreaks sound.

Jnr has been honing his style of mind warping uberfunk for several years and is now ready to unleash a torrent of sick bass at unsuspecting breakbeat fans. Jnr has pledged a strong allegiance to Trigger (the UK’s top Electrobreaks night and label) and has already stunned audiences there with his psychoactive sets. He heads up Subatomik Recordings.

This months Mantis also heralded the start of a new alias for ZILLA. Art school dropout ZILLA (government name Dylan Richards) began working on his own brand of super-evolved mixes towards the latter end of the nineties as a reaction to the glut of uninspiring mix compilations that had began to flood the industry.

Check out his Gods of War blog for the most up to date movements as his current alias King Cannibal.

Its not often that someone comes along and defines your opinion of the potential of djing. Over the course of two under-the-counter mix-cds, the man known as ZILLA has done just that.
– Fact Magazine

someone please give this guy a residency>!- D.K (Solid Steel/Ninja Tune).

Massive shouts to Dylan and Lex. Proper skills both of ya. Great feedback from the chat and the FM listeners.