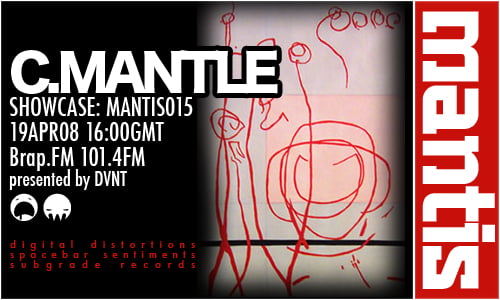 Finding his feet, yet causing a storm we’ve Scotland’s C Mantle in for a session. Music from Kanji Kinetic, Rephlex’s The Tuss, Boards of Canada remixing Meat Beat Manifesto, Scape One, thatboytim.

C Mantle is really starting to develop his sound now. Having had his first release on Digital Distortions back in 2006 and being featured on the flip of 7th Spacebar Sentiments release (with Skeetaz on A), he is building up quite a few fans, (myself included of course) with his driving, hard, distorted electro techno noise.

If you like electro along the lines of the wee djs, hard metal and punk distortions and krunky noise like King Cannibal you’re in luck. We pinned Mr Mantle down and he’s provided an exclusive mix of his sound. Prepare for an audio assault. The chatroom went nuts to his showcase so have a listen, you’re in for a treat.

Prior to that the first hour gave up some right tasty treats. Kanji Kinetic by far got the biggest reaction with the mega rave, techno bosh attack. Please get in touch and let us know your reactions to the tunes so we can tell the talented folk who construct these sounds.